Bellevue’s own piece of history has come home.

The Mad River & NKP Railroad Museum is currently fundraising to restore and display our newest acquisition, Nickel Plate Road Steam Locomotive No. 757. As of January 1st, 2021, $175,000 has been raised of our initial goal of $250,000 to relocate, cosmetically restore, and display this iconic locomotive. The relocation phase (BRING BACK 757) has already been completed, and contributions made in the future will be used for the restoration of the locomotive, and the construction of a covered display site.

The Mad River & NKP Railroad Museum is recognized by the Internal Revenue Service as a 501(c)(3) nonprofit organization, contributions are tax-deductible if applicable. Contributors’ names will be added to our donor board which will be displayed with the locomotive after restoration is complete, all contribution amounts are confidential unless specified otherwise by the donor. 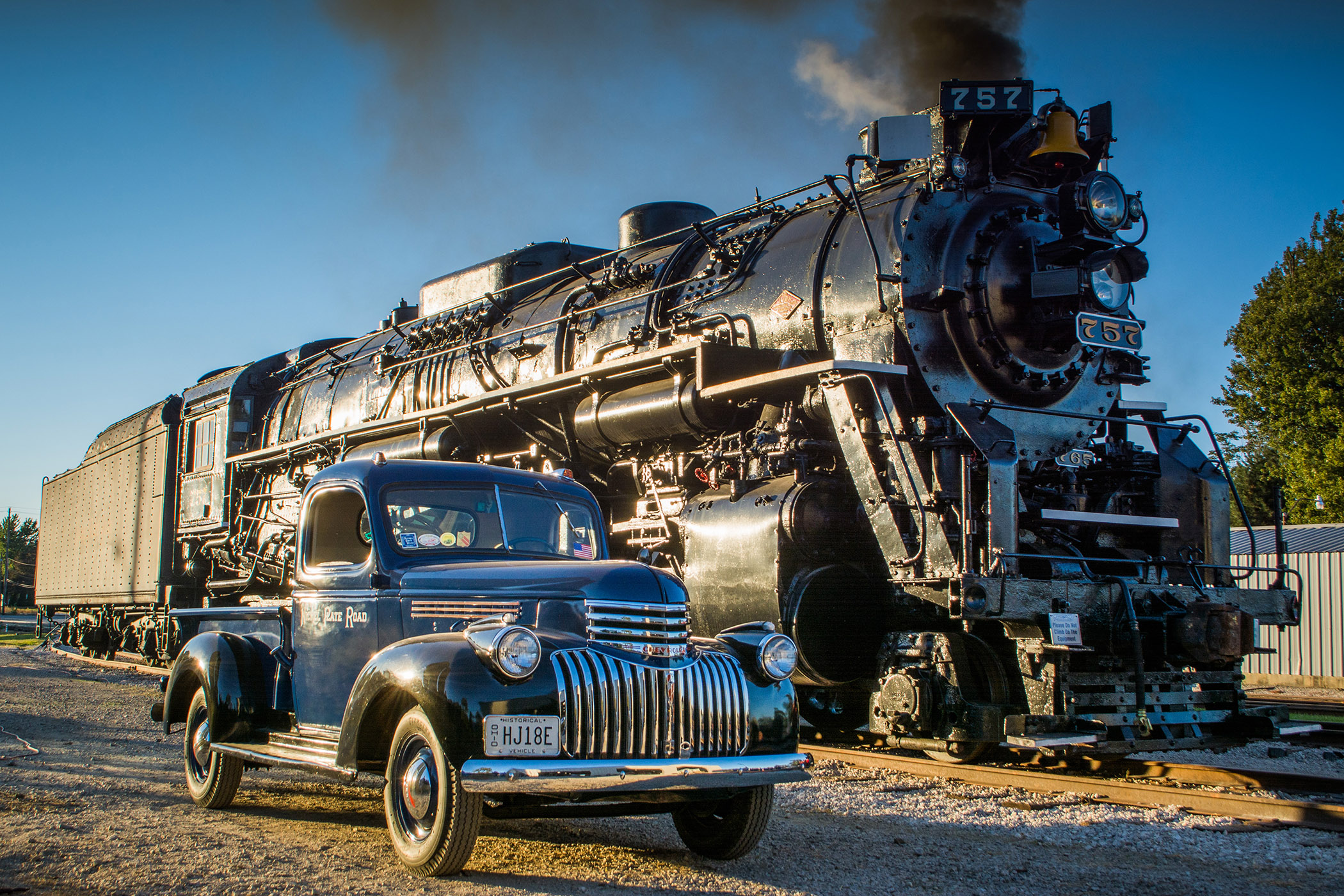 Constructed in 1944 by the Lima Locomotive Works, 757 was once one of 80 technologically advanced, fast-freight steam locomotives on the roster of the Nickel Plate Road. The 757’s home terminal was Bellevue, Ohio where it and its sister engines were charged with operating manifest freight and freight trains between Chicago, Fort Wayne, Indiana, Conneaut, Ohio, and Buffalo, New York. These engines soon became icons of the railroad and ubiquitous throughout the system.

The Berkshires were especially liked by their crews and regarded as some of the finest steam locomotives in the Midwest. Weighing 440,800lbs, the 757 could operate at speeds in excess of 60MPH and pull some of the longest and heaviest freight trains of the day. TRAINS Magazine would later proclaim that the Berkshires were “engines that saved a railroad.”

Retired in 1958 and stored in Bellevue throughout the 1960s, 757 was originally designated to be donated to the City of Bellevue, Ohio long before the Mad River & NKP Railroad Museum was established. The City of Bellevue could not provide a display site for the locomotive after many years of failed attempts. In 1966, the newly created Railroad Museum of Pennsylvania saved the locomotive from an uncertain future by accepting its donation from the Norfolk & Western Railway.

In early 2017, the Mad River & NKP Railroad Museum (MR&NKP) and the Railroad Museum of Pennsylvania (RRMPA) of Strasburg, Pennsylvania began negotiations to allow the 757 to return to her hometown of Bellevue and become a featured display at the MR&NKP Museum. Years of outside display at Strasburg had taken their toll on the locomotive and the RRMPA decided that 757 did not have as strong a connection to Pennsylvania’s railroading history as some of their other locomotives and railroad cars, which also require considerable attention. In the end, the RRMPA agreed to transfer ownership of the 757 to the MR&NKP upon removal of the locomotive.

On August 1st, 2017, the Bring Back 757 Fundraising Campaign was launched to relocate the 757. As the MR&NKP received financial support, work was performed by volunteers and steam contractors on the locomotive for the next several months to prepare the locomotive for her 500-mile journey back to Bellevue, Ohio.

After 18 months of fundraising and preparations, the 757 left the RRMPA on February 11th, 2019. Traveling over the railroad lines of the Strasburg Rail Road, Amtrak, and the Norfolk Southern Corporation, the locomotive was towed 500 miles without incident after sitting for nearly 53 years. A Nickel Plate steel cupola caboose from the MR&NKP escorted the locomotive with an escort crew, lubricants, and tools. On February 14th, 2019, Norfolk Southern delivered the 757 to the MR&NKP Coach Yard.

The 757 was on display at the MR&NKP Museum during the 2019 season. In June of 2019, the locomotive was cleaned, painted, and lettered as a temporary measure to improve appearance. Also, in the Summer of 2019 a new restoration building was erected at the MR&NKP capable of handling the 757, the locomotive will be moved inside this facility in early 2021 after a rail connection is established.

The cosmetic restoration will include a new sheet metal jacket for the boiler, a rebuilt cab structure, the interior of the cab restored, the running gear reassembled (some items were disabled for the movement home), and fresh paint and lettering. The goal is to restore and preserve the 757 to an “in-service” appearance for the education and enjoyment of our guests.

Plans are in the works to construct a covered shelter that the 757 can be enjoyed by our guests while being protected from the harsh weather conditions of Northern Ohio.

The restoration of the 757 will be cosmetic only. Any effort to restore and operate a mainline steam locomotive like the 757 would likely cost over a million dollars and require personnel, equipment, financing and infrastructure that our museum does not have.